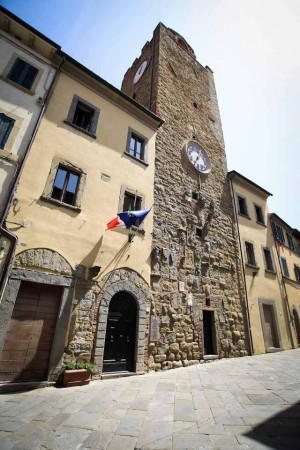 Palazzo Pretorio and Tower - Monte San Savino - Palazzo Pretorio and Tower - Monte San Savino
The fourteenth century Magistrate’s Palace is the most ancient, noble, public building in Monte San Savino. It holds the tower of the town which is 30 meters high. We think the Perugini family  built it in 1339 when they began ruling Monte San Savino; in fact they put their coat of arms with the griffon on its facade (later it was removed). Formerly the Palace and its offices extended as far as the Piazza di Monte as it is called today. The Florentine podestà representatives and some deputies of the Lords of Monte San Savino administrated  the penal and civil justice from here with their “family” (XVI and XVII century). In the XVIII century more than 40 portraits representing all Princes and Princesses of Monte San Savino were exhibited in the hall of Palazzo Pretorio where Veltroni painted La Pietà. Afterwards, its  offices moved to Palazzo di Monte, the old Palazzo Pretorio was auctioned by the town-hall to host the carabineers’ barracks (1874). Since 1992 it has been the seat of the International University Centre.
It’s a three-storey palace with two wings  looking up to the tower, each with two open axis and framed windows on the upper storeys. The access door to the tower was a former window opened in 1681 to  give more light to the inner rooms of the public prison, as the date engraved on it says. On the shelf there was the “marzocco” on stone of 1506 by the sculptor Biancalana, that  is now in the Cassero museum.Inner: In the conference hall of the palace there is a fresco of La Pietà painted in 1538 by Stefano Veltroni, . The tower  still has  a lot of the former openings and on the upper side shows the faces of the public clock (whose care was in the hands of a special “temperator”): the face of the clock in Corso Sangallo is lower than that of  the other two  sides. The merlon and the bell gable with a single bell (remoulded many times, the last time in 1954) is linked to the clock mechanism.  Above, there are some pictures of some of the Saints belonging to  local tradition  and some inscriptions on relief.