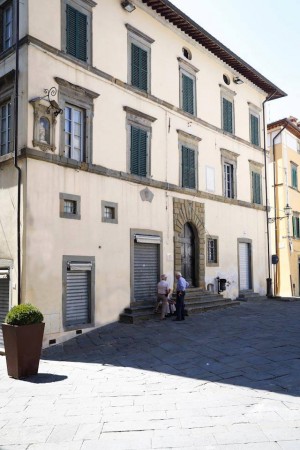 The Palace of the Registry - Monte San Savino - The Palace of the Registry - Monte San Savino
It was the seat of the Registry of the Municipality. Renewed in 1992, this recatangular plan building is now the public library “G. Colombo” (it preserves about 20000 books ) and the municipal historical archive (over 4000 archival pre-unification units). In this building there were the archives of the town, of the jurisdiction, the clerk of the court’s house and a big hall for the meetings of the General Council of the community.

It holds a gallery with  portraits of the greatest characters of the town such as Medici and Lorena (now they are kept in the Town Hall). After suppressing the registry (1865) it became the office of the superintendent of public property, schools and financial office.
Tradition says it was one of Sansovino’s projects, but it was probably one of Di Monte’s houses as testified by the coat of arms on the keystone  of an arch. Two cornices  separate two orders of five windows with architrave and the top floors and the ground floor where there are the rustication arch and some non-original shop windows. On the left of the façade there is a niche with Madonna and Child. Above  the door of the shop on the right there is a commemorative plaque with the coat of arms of the Cavaliers of St. Stephen (that showed their office in the town). On the architrave of a portal in Corso Sangallo one can read ”for not sleeping” written around the coat of arms of the Baldi family.