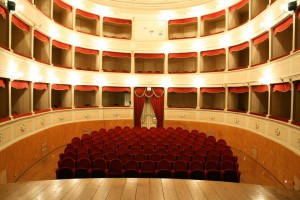 Inside the decorations are sober and in good taste with a rich central chandelier. On the stage there is the coat of arms of the town and the clock of the auditorium. In the snack bar we can still just see some of the structures and decorations of the ancient oratory of the Company of the White, which has been  part of the theatre since 1870.
The members of the Savinese Company of the Stiff and the Clumsy made their first performances in the big room of the barn near the ancient oratory of the Company of the White (1692). Later the room was enlarged (1726) by F. Morazzi where it became a repertory theatre.