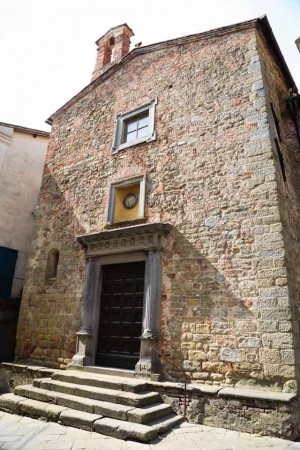 Saint John's church - Monte San Savino - Saint John's church - Monte San Savino
In the XV century it was an oratory dedicated to Saint Anthony and seat of the homonymous company. Initially, it was possible to enter the church only by going throught the cloister of the church of Saint Agustín to the Tuscan door by Andrea Sansovino.  At the beginning of the XVII century this building was restored completely by Orazio Porta and probably during the restoration works the positioning  of the church was changed. After suppressing the religious  fellowship, the church was used as a barn until 1819, when Paolo Girolamo Galletti bought it.


The church presents a simple brick façade where the portal by Andrea Sansovino stands out. In the aedicule above the portal you can see a glazed terracotta representing the Virgin and the Child (first half of the XVI century). The church conserves an altar piece by Ulisse Giocchi representing Saint Sebastian, and an autographed panel by Orazio Porta portraying  Saint Anthony Abbot and Saint Paul First Hermit. .