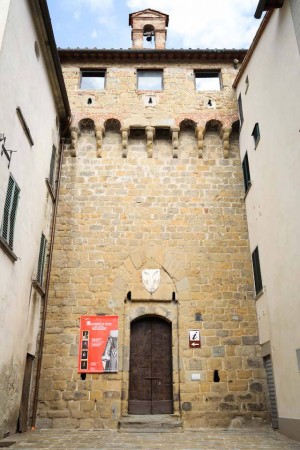 Restoration works were undertaken in the seventies, and today it is a museum, exhibition and conference centre. It was probably built by the architect Bartolo di Bartolo  in the XIV century (the stronghold of Lucignano has  a similar structure) when the noble lord from Siena, Deo de Tolomei, took over Monte San Savino. However, the Cassero is presumed to be more ancient and it was probably only restored during the domination of Siena. In the early days, the fortress was surrounded by a moat and people were able to get to it by passing over a draw bridge.
When Monte San Savino was conquered by Florence (1384), its symbol, which is a shield with a lily,  was placed on the access portal. At that time, the lily became part of the coat of arms of the town of Monte San Savino. In 1588 the community bought the building for 400 scudos from Florence. In 1594 the pawnshop was moved there from Le Logge. When, in 1617 the town sold The Cassero to a private citizen, he cleaned it (1619), but it had its office here again in 1638 when the community bought the building back.
In the second half of the XVI century, the Cassero lost its importance as a defence building and the moat area was sold to private citizens who built new structures on it.
In 1733-34 an important restoration of the Cassero was undetaken by the engineer Luigi Orlandi; the dungeon was lowered  and a big staircase was built in the courtyard. In 1891 it became a big dormitory for poor people until 1960. From 1970 to 1986 new restoration works were undertaken by the architect Carla Corsi and the surveyor Silvio Rossi.