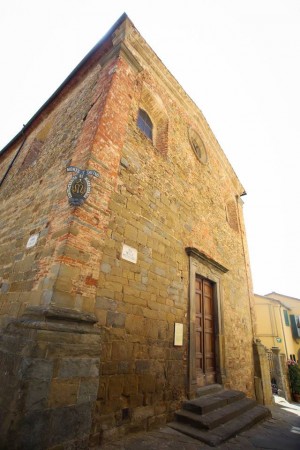 The parish church - Monte San Savino - The parish church - Monte San Savino
Built in the XII century in Romanesque style and progressively altered by subsequent restoration works, the ancient parish church of Monte San Savino shines with its secular, religious and historical memories of local devotion. When the oldest  church (VI century) outside the the walls of  Monte San Savino was moved and rebuilt in the XII century, it still was located outside  of the walls of 'Ajalta fortified area'.
Entitled to Saints Egidio and Savino, the former owner and the latter co-owner and patron of Monte San Savino, in 1494 by special permession of Pope Alexander V,  the patronage of the church was given to the noble family of Galletti.
It was rebuilt in the XV centiry by the architect Sandro Bambocci, then modernized in 1600 at the time of priest Angiolo Cungi and then radically rebuilt in the years 1748-49 on the initiative of the first priest Anton Leo Resrorelli.
When the church of St. Augustine became seat of the parish and gained the archpriesthood title (1813-1818), the parish was entrusted to the company of the SS. Sacramento that later, in 1851, was turned into  the brotherhood of Mercy who is currently running it.
Located where Monte San Savino's main road (corso Sangallo) and Via della Misericordia intersect, it  presents a  rectangular perimeter.
The facade is opened by a portal with lintel and side posts, and two windows surmounted by a rose window;the apse is connected to other buildings.
On the left side, on the main road , there are three windows, a closed door and a gateway (the latter is above the coat of arms of Galletti): on the left of this portal, a "gothic cross" is carved on the stone wall and you can read  the peculiar  inscription ''REBUILT THE  STREET FROM THE DOOR 'FIORENTINA' (FLORENTINE)TO DOOR 'ROMANA'. YEAR 1784.''