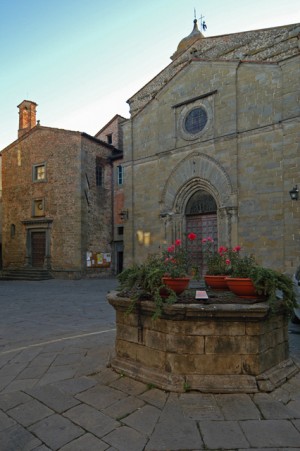 The Church of Saint Augustin - Monte San Savino - The Church of Saint Augustin - Monte San Savino
This church was built upon the request of the  Augustan friars  in the XIV century. Its grey stone facade has  an upper part with a rose window, probably by Maso Porro and a lower part with a lanced arch and some intricate little columns revoking the late Gothic Humbrian style. The large main wooden door dates back to XV century. The rose window depicting  St. Agustín between two angels is from Guillaume de Marcillat’s workshop. The square based bell tower with a dome on the top was erected in XIX century, while the church was built in the XIV century replacing  the church of St. Jacopo and Christopher. It was enlarged by the hermit, friar Tinacci, whose birthplace was presumably Monte San Savino or Altopascio, he was elected bishop of Narni in 1343. Thanks to one of Valli’s legacies, the friars, helped by Sansovino, were able to restyle the square placing the well in front of the church. Sansovino built the “tramezzo” (also mentioned by Vasari), the cloister and designed a few rooms of the monastery. In 1530 Baldassarre Peruzzi wanted to modernize the church, but he never did. The construction of another cloister was never realized: it was supposed to have three arches (today they are walled up) built in 1540 under the direction of Domenico di Nanni del Piffero. In 1700 Monsignor Angelo Massa made some radical changes to the church making it two metres higher, building eight stucco altars and raising Sansovino’s vestibule.


When Napoleon suppressed religious orders, the friars were banished, in 1813 the church became a parish and the seat of the archpriest. Later, in a part of this building the nuns of Saint Theresa were allowed to provide education for the young girls of the town. Inside, a beautiful painted panel with the Assumption of the Virgin by Giorgio Vasari is placed  above the main altar.