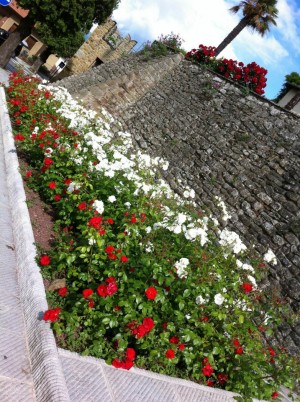 Castle Walls - Monte San Savino - Castle Walls - Monte San Savino
The ancient walls that surround the historical centre of  Monte San Savino have  a sloping trend  with an inlet by the Chiesa del Suffragio. The medieval walls (X-XII century) were destroyed in 1325 by Guido Tarlati, bishop and  Lord of Arezzo. Since  that time, a lot of restoration work has been undertaken, the results of which are the current town walls. The last work to be undertaken was the demolition of a part  of the wall with a tower  North of Porta San Giovanni and the repairs of a large  part of the town walls by the department of cultural heritage from 1970 to 1986.
The surrounding walls of Monte San Savino have  four doors:
-Porta Fiorentina, formerly of Aialta, dates back to 1550. Its design is attributed to Vasari.
-Porta Romana, formerly called Santa Maria in Mercatale, is the only town door which has kept its fourteenth-century look.
-Porta Senese, called Porticciolo Guglielmi, where you can find the coat of arms of the family Orsini.
-Porta di San Giovanni, facing Arezzo, has  the name of a baptistery located outside the town walls.