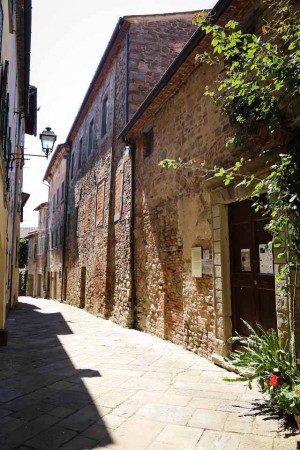 After the removal in 1799 of the Jewish community, which was established in Monte San Savino in 1627, the synagogue building passed to the Israelite University (i.e. community) of Siena, then became state property, then of private individuals and finally it was acquired. in 1924 by the Municipality of Monte San Savino (which in any case had already carried out - and will provide later - its most urgent restorations on various occasions).

Overall, consisting of two buildings, both the real Synagogue, located on the top floor, and the school were located, and probably the same house of the rabbi or the massari of the Jewish community: it originally had two floors plus the ground floor, now conceivable only from the position of the windows, currently lacking the floors. The first body of the building that meets at no. number 13 is lower than the other - probably, after the collapse suffered due to the tremendous hurricane that hit the Monte in August 1872, this part of the building was rebuilt as it is now - it has a single pitched roof, a portal ashlar and architrave and two rectangular windows (you can see another buffered portal); inside, not paved, there are wall arches built in the century XX to guarantee stability to the old walls. The second body at n. number 14 has a portal with a lowered arch and framed windows: inside it is possible to notice, at the top, a painted window still quite well preserved and the niche with a frame already destined to contain the aron ha-kodesh (cabinet for the custody of laws ) and, below, the remains of earthen pipes perhaps used for the miqvé (ritual bath). In the adjacent private house there is a stone seat that popular tradition usually calls "the rabbi's throne".